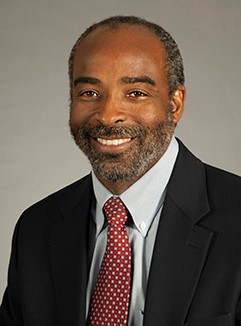 In 2019, Dr. Everette Joseph joined the National Center for Atmospheric Research (NCAR) as Director from the University at Albany, State University of New York, where he was director of the Atmospheric Sciences Research Center (ASRC).

While at Albany, Joseph co-led the $30.5 million New York State Mesonet for advanced weather detection and the New York State Center of Excellence for the Weather Enterprise. He has served as principal or co-principal investigator on over $90 million in research grants from NSF, the National Oceanic and Atmospheric Administration, NASA, the Army High Performance Computing Research Center, and other agencies. He joined the UCAR Board of Trustees in 2011, where his colleagues elected him vice chair in 2015 and chair in 2017.

Joseph played a significant role in the National Oceanographic and Atmospheric Administration’s (NOAA’s) Aerosol and Ocean Science Expeditions. He has conducted extensive research observing the role of aerosols and certain gases on climate and weather from field observations in the Mid-Atlantic to marine expeditions across the Atlantic Ocean.

From 2008-2013, Joseph served as director of the Howard University Program in Atmospheric Sciences (HUPAS), Washington, D.C. HUPAS, through the work of Joseph and his colleagues, significantly increased the number of minority Ph.D. graduates in the atmospheric sciences nationally over the past 10 years.

At Howard, he led the Climate and Radiation Group, a core research component in the Department of Physics and Astronomy. Joseph taught atmospheric physics, radiation, and remote sensing courses. There he also led the development of a major field observation program with university, government, and industry partners designed to improve the ability of satellites to monitor the atmosphere from space and the skill of atmospheric models to better forecast weather, climate and air quality.

Joseph has been a member of the Board on Atmospheric Sciences and Climate of the National Academy of Sciences, Engineering and Medicine since 2014. Other roles have included membership on the Steering Committee of the NASEM Decadal Survey for Earth Science and Applications from space; the NOAA Science Advisory Board; and the American Meteorological Society Commission on the Weather, Water and Climate Enterprise. He also is principal investigator for the NSF-sponsored US-Taiwan Program for International Research and Education and co-PI on the NOAA Aerosol and Ocean Science Expeditions, a series of trans-Atlantic intensive observation campaigns to gain an understanding of the impacts of long-range transport of aerosols over the tropical ocean.

Prior to his position at the University at Albany, Joseph was director of Howard University’s Program in Atmospheric Sciences, where he dedicated himself to teaching, mentoring, and inspiring the next generation. He also served as director of the Beltsville Center for Climate System Observation, a NASA University Research Center. In that position, he brought together colleagues at Howard, NASA, NOAA, Penn State, University of Maryland Baltimore County, and other institutions to develop an interdisciplinary, multi-institutional, multi-agency center studying key atmospheric processes with particular relevance to predictive capability in weather, climate, and air quality.

Joseph earned his Ph.D. in Department of Physics with an emphasis on atmospheric science from the University at Albany and earned a B.S. in physics from SUNY Cortland.